Aperture priority often abbreviated Av (Aperture Value) or A on a camera dial,is a 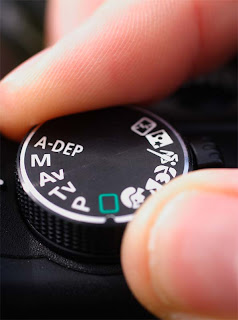 setting on some cameras that allows the user to choose a specific aperture value while the camera selects a shutter speed to match.The purpose of using aperture-priority mode is to control the depth of field.
The camera will ensure proper exposure.Aperture Priority mode is different from manual mode, where the user must decide both values, shutter priority where the user picks a shutter speed with the camera selecting the aperture to match, or program mode where the camera selects both.
It is also useful to suggest how the camera should decide a shutter speed, without risking a poor exposure. In landscape photography a user would select a small aperture when photographing a waterfall, hoping to allow the water to blur through the frame. When shooting a portrait in dim lighting, the photographer might choose to open the lens to its maximum aperture in hopes of getting enough light for a good exposure.
In addition, aperture priority mode allows the photographer to force the camera to operate the lens at its optimum apertures within the limits of maximum/minimum aperture for a given focal length of the lens. Commonly, lenses provide greatest resolving power with a relatively medium-sized aperture.
When would you use Aperture Priority Mode?
Use Aperture Priority Mode when they are attempting to have some control with reg 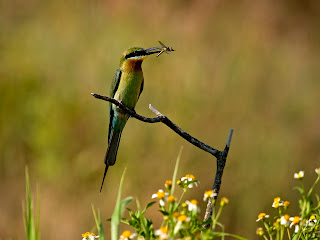 ards to Depth of Field (DOF).If you want a shallow DOF (for example in the shot to the middle which has the bird in focus but the background nice and blurred) or in portrait photography, where a wide aperture is desired to throw the background out of focus and make it less distracting,you have to select a large aperture (for example f/1.4) and let the camera choose an appropriate shutter speed. If you want an image with everything in focus like in landscape photography, where a narrow aperture is necessary if objects in foreground, middle distance, and background are all to be rendered crisply(for example the image in the bottom) you have to pick a smaller aperture (for example f/22) and let the camera choose an appropriate shutter speed (generally a longer one).
When choosing an Aperture keep in mind that the camera will be choosing faster or longer shutter speeds and that there comes a point where shutter speeds get too long to continue to hand hold your camera (usually around 1/60). Once you get much slower than this level you’ll need to consider using a tripod. Also if you’re photographing a moving subject your shutter speed will impact how it’s captured and a slow shutter speed will mean your subject will be blurred).
at 12:57 PM

thanks for posting .. this was really helpful!

I’m very glad to found this website because; it carries awesome and actually good data in favor of readers.

I recently came across your blog and have been reading along. I thought I would leave my first comment. I don't know what to say except that I have enjoyed reading. Nice blog. I will keep visiting this blog very often..

God allows us to experienced pain and failure for us to become a better person. To stand still and continue our life's journey. Visit my site for more information.

I am very happy to locate your website. I just wanted to thank you for the time you spent on this great article. I definitely enjoyed reading it and I have you bookmarked to check out new stuff you post.

Love it! Very interesting topics, I hope the incoming comments and suggestion are equally positive. Thank you for sharing this information that is actually helpful.

Hey! I just wish to give an enormous thumbs up for the good information you've here on this post. I might be coming back to your blog for extra soon. casino slots