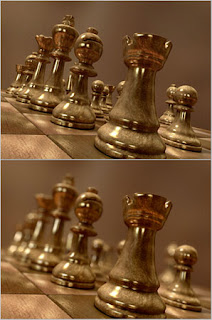 ge.
The DOF is determined by the subject distance (that is, the distance to the plane that is perfectly in focus), the lens focal length, and the lens f-number (relative aperture). Except at close-up distances, DOF is approximately determined by the subject magnification and the lens f-number. For a given f-number, increasing the magnification, either by moving closer to the subject or using a lens of greater focal length, decreases the DOF; decreasing magnification increases DOF. For a given subject magnification, increasing the f-number (decreasing the aperture diameter) increases the DOF; decreasing f-number decreases DOF.
The advent of digital technology in photography has provided additional means of controlling the extent of image sharpness; some methods allow DOF that would be impossible with traditional techniques, and some allow the DOF to be determined after the image is made.
For some images, such as landscapes, a large DOF may be appropriate, while for others, such as portraits, a small DOF may be more effective.
The image on the right can show you better what does it means.In the first photo you have a large DOF,same as the one used for landscape photography where all the chess pieces are very sharp.In the second photo you have a small DOF like the one used for portrait photography where just the first piece the rook and maybe the second piece are in focus and are sharp background instead appears blurry.
at 11:31 AM